Fires can be quite destructive by nature, whether it is in a home, commercial or industrial building, vehicle or even in the wild. Establishing the origin and probable cause of a fire can be a complex task for a fire investigator.

The recommended systematic approach in a fire investigation is based on the scientific method. In general, the cause of a fire can only be reliably established when the origin of the fire has been correctly established.

Determining the origin of the fire involves coordinating information derived from one or more of the following elements when investigating a fire:

*Arcing: An electrical discharge (current) across a gap or through a medium, between two conductors.

Fire patterns are visible, measurable physical changes or identifiable shapes formed by a fire effect or group of fire effects. Common patterns are charring, calcination and oxidation. The examination of fire patterns and comparative analysis of thermal damages due to the fire may assist the fire investigator to establish an area of origin.

Caution should be exercised when establishing an area of origin based solely on fire patterns because other elements may influence the propagation of a fire. For example, such elements include the types and amount of combustible materials present, space confinement and geometry, airflow sources such as windows and doors, as well as surfaces that may affect heat radiation. 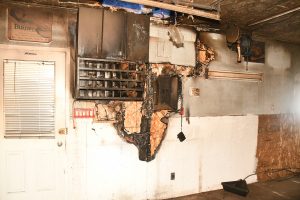 Analyzing the relative position of arcing marks on installations and equipment on a fire scene may assist a fire investigator to establish, specify or confirm the area of origin. This technique is based on the assumption that an electrically powered cable damaged by a fire will show an arcing mark where the cable was sufficiently damaged first by the fire. 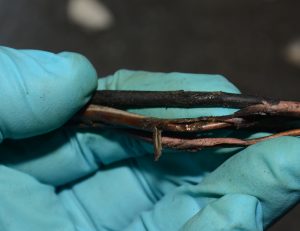 Information provided by those who witnessed the fire or conditions prevailing before the fire, as well as data collected from camera footage or security systems, can also help to establish the origin of the fire.

Shock and confusion when witnessing a significant event such as a fire may affect the memory of those who witnessed it. Caution must be used regarding witness information about the discovery of the fire and concluding on a specific area of origin based solely on witness recollection.

Fire dynamics are the physical and chemical principles governing the ignition and propagation of a fire and the interaction between the fire and the various building systems. Analyzing the fire dynamics of a scene may assist the fire investigator to establish the origin of the fire. 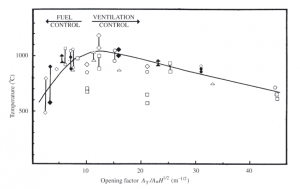 CAUSE OF A FIRE

The cause of a fire is defined as the circumstances and conditions that bring together the ignition source, the first ignited fuel, and the oxidizing agent to cause a fire.

Following the sequence of the scientific method, once the data is collected and analyzed, hypotheses can be developed and tested to determine the cause of the fire. Fire investigators may consider several hypotheses throughout their investigation. In fact, when using the scientific method, a key step is to consider alternative hypotheses that could be consistent with the data. The entire process needs to be reviewed to ensure that all credible data are accounted for and all credible alternative hypotheses have been considered and eliminated.

Documenting the facts that support the cause determination and the exclusion of all other reasonable causes are critical for an investigator.

The determination of a cause must be supported by credible factual data and may not be determined by the use of negative corpus. Negative corpus is referred to as identifying the ignition source for a fire by believing to have eliminated all ignition sources found, known, or suspected to have been present in the area of origin, and for which no supporting evidence exists.

The negative corpus process is inconsistent with the scientific method and should not be used since it is untestable.

Two levels of commonly used certainty are “probable” and “possible”:

In the case of two or more hypotheses that are equally possible, based on data and information collected, the level of certainty is “possible”, and the cause must remain undetermined.

If the level of certainty of the opinion is only “possible” or “suspected”, the cause of the fire is unresolved and should be classified as undetermined.

It is up to the investigator to decide the degree of certainty of the data collected and the assumptions made.

FINAL OPINION – LABELLING THE CAUSE AS UNDETERMINED

The scientific method requires that the determination of the origin and cause of a fire must be supported by credible data and facts. Establishing the cause is a complex process that requires the collection, analysis, and testing of competent data.

In short, once all credible data has been collected, analyzed, and tested, there are a few ways in which a fire investigator must conclude that the cause of the fire remains undetermined:

Questions on the subject? Contact the author of the article!

By : Whit Genoway, ingénieur, Fire origin, cause and propagation 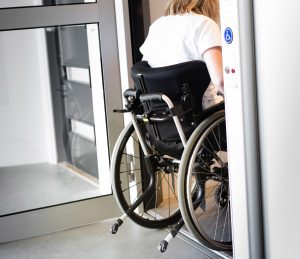 Does my project fall under the new requirements for inside accessibility to dwelling units?

Leakage from a Drainage System for the Recovery of Food Residues